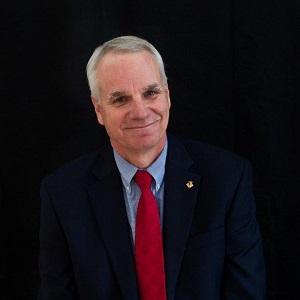 The Buckeye Valley Family YMCA announces the retirement of Edward Bohren, long-time CEO, to leave the organization in February of 2021, after serving the YMCA for 36 years. Twenty of those 36 years were spent as CEO of the Licking County Family YMCA, where the organization experienced tremendous growth and community impact under Bohren’s leadership.

Raised in Southern Ohio, Ed grew up swimming at the Marietta YMCA. Bohren served in the United States Marine Corps until 1980, when he and his wife Berniece moved to Athens, Ohio. Ed graduated from Ohio University in 1984, with his bachelor’s degree in recreation studies and his master’s degree in physical education administration. Upon his graduation, Ed began his career at the Sidney-Shelby YMCA as an Aquatics and Program Director. Bohren then went on to work in aquatics, youth programs, health and wellness and management at the YMCAs in Newark, Delaware, Pennsylvania, and West Virginia. Ed became the CEO of the Licking County Family YMCA on May 1, 2000.

During Ed’s tenure as CEO, the Licking County Family YMCA has experienced tremendous growth and expansion of programs. The YMCA has undergone several major renovations, including the John and Christine Warner Childcare Center, the Alford Aquatics Center, the Mitchell Center and the Reese Wellness Center. In 2019, the Licking County Family YMCA has grown to 13,049 members, and provided $320,433 in financial assistance to children and families in our community.

Under Bohren’s leadership, the Licking County Family YMCA expanded to serve the needs of the community in Western Licking County. In 1998, the Pataskala Rotary approached the Licking County Family YMCA with a vision of establishing the programs and instilling the values of a YMCA in Pataskala. Through community collaboration, the Western Branch opened at the former Jersey Elementary school. The Western Branch moved to its current location at 355 West Broad Street in 2007. In ten years, membership grew to 1,920 members. The Renovation and Expansion of the Western Branch Capital Campaign launched in 2019, and the $3 million project was completed in early 2020.

Serving the needs of the community has always been Ed’s top priority. Throughout his time at the YMCA, Ed has built deep relationships and partnerships in the community to provide quality programs to youth, families and individuals. In 2016, in collaboration with a member of the Board of Directors, the Y Healthy Kids Network was developed. The Y Healthy Kids Network (YHKN) addresses the issues of hunger and food insecurity to elementary students by providing students access to food over the weekend. In the 2016-2017 school year, the YHKN backpack program served 310 children in ten schools. Through community partnerships, the program expanded to serve 560 children in twenty schools in the 2019-2020 school year.

Ed has also remained committed to the mission of the YMCA: To put Christian principles into practice through programs that build healthy spirit, mind and body. During Ed’s time in leadership, the Christian Emphasis program was developed, to serve the spiritual needs of YMCA staff and members. The YMCA core values of caring, honesty, respect, responsibility and faith are incorporated into all YMCA programs.

When asked ‘What does the Y mean to you?’, Ed states “Many things. Most importantly, family and community.  The Y is like family.  Over the years, most of the closest friends we have been blessed to have were the direct result of the Y, some members, fellow employees and colleagues. They have become lifelong friendships and relationships. The second is community.  Serving our community is the foundation of everything we do. It has been a great privilege to be a part of an organization that impacts so many lives and makes our community a better place.”

Board President, Christian Robertson reflects, “Our community has been so blessed with Ed’s passion for the mission of the YMCA, over his twenty years in Newark. Under his leadership our YMCA branches are now well positioned to serve the Licking and Muskingum county communities. We are happy that Ed and his wife, Berniece, will remain in our community following retirement, as the Newark area has become their home. The Board of Directors know we have a tall order ahead of us, in finding a CEO that has the heart and passion for our YMCA and our community.”

A national search for the next CEO of the Buckeye Valley Family YMCA will commence.

Driven by its founding mission, the Y has served as a leading nonprofit committed to strengthening our community for more than 145 years. The Y empowers everyone, no matter who they are or where they’re from, by ensuring access to resources, relationship and opportunities for all to learn, grow and thrive. By bringing together people from different backgrounds, perspectives and generations, the Y’s goal is to improve overall health and well-being, ignite youth empowerment and demonstrate the importance of connections in and across 10,000 communities nationwide. Learn more at bvfymca.org.